"Has anyone ever died on this thing? I had asked at dinner with a few other Challengers the night before the event began.  Now, standing on the eastern ridge heading down from the summit of Beinn Fhada, the question rang in my head.  It was steep, slippery, and rough terrain; it was late in the day and I was getting tired.

But let's start at the beginning...

The Great Outdoors Challenge is a yearly walk across Scotland.  It takes place over two weeks in May and requires the Challengers to be self-sufficient in their crossing of the Highlands.  That means: no car rides or support team meeting you at road crossings, carrying your own food and resupplying along the way, navigating on your own, and wild camping most nights.  Each participant chooses from one of fourteen starting points on the west coast and plans their own route to the east coast.  Experienced vetters check your route for safety and viability.

I had arrived in Shiel Bridge, my starting point, the night before and had spent a nice evening at the Kintail Lodge Hotel.  I had spent the previous 27 hours flying from West Palm Beach, FL to Dublin, then onwards to Glasgow where I had a few hours to spend getting fuel, mailing a couple packages, and waiting around.  From there it was a five hour bus ride up to Shiel Bridge, where we arrived about 8:30pm.  I got set up in the Wee Bunkhouse and then grabbed dinner in the pub (conveniently located in the hotel) with a couple other North Americans I met on the bus ride up.  I was exhausted from traveling so I was in bed soon after dinner. 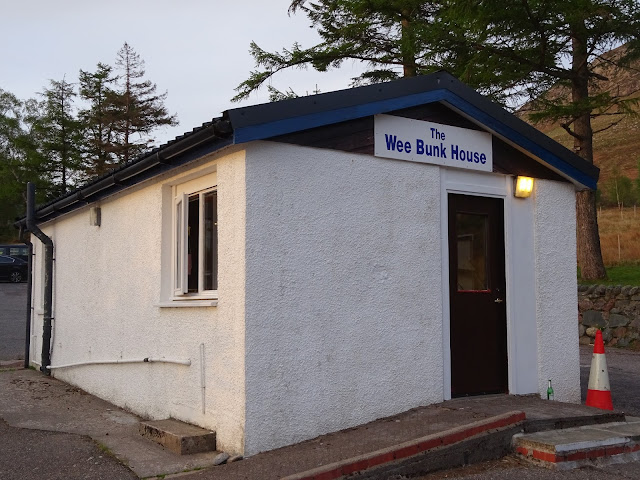 I awoke bright and early the next morning, had a full Scottish breakfast in the restaurant, and packed my gear to head off.  First I had to sign out and do the traditional toe dip in the water to start my crossing.
The first 2.5 miles were along the road to get to the path that would start ascending up the valley, eventually connecting to a stalker path that would take me up to the summit plateau of Beinn Fhada. 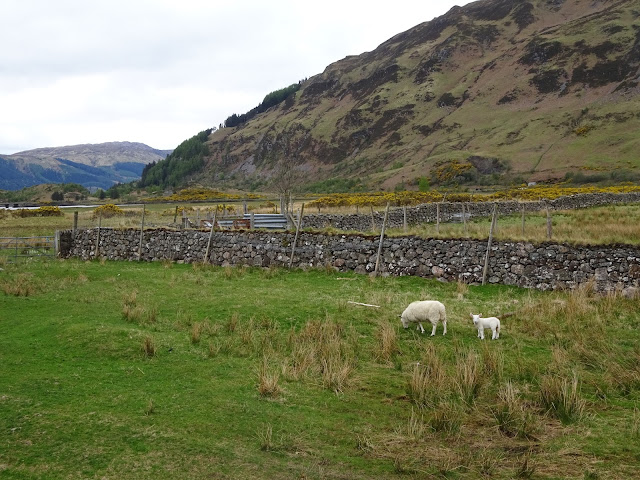 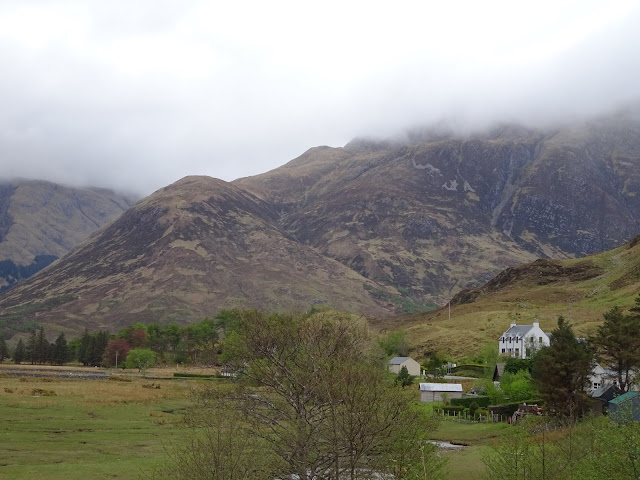 I spent a few minutes on the summit enjoying the view, but it was cold and windy and getting late in the day.  My route would take me down the eastern ridge of the mountain, and the first part of the walk was easy enough as it was relatively flat.  Once I started descending it was anything but.  At times there was vague trails to follow, but most of it was over trackless bog.  I slowly picked my way down, learning that any grass that was solid looking was surprisingly slippery and would hide rocks that twisted my ankles.  At times I had to step from grass tuft to grass tuft to avoid the bog.  About a third of the way down, after slipping for the 50th time, the question "Has anyone ever died on this thing?" began playing over and over in my head. There were steep slopes to my left and right most of the way, and a slip in the wrong place could lead to disaster, especially seeing that, as far as I could tell, there was nobody else on the mountain.

I continued slipping and sliding my way down the ridge, eventually making it down to the footpath that would lead me to the Alltbeithe Youth Hostel where I would be camping for the night.  I arrived

around 6:30 pm, exhausted and relieved to have made it down that ridge safely.  I quickly set up my tent and made myself a hot dinner.  I talked to a few other people that were camping, but soon was ready to climb in my sleeping bag for the night.

When it was all said and done, it had been an exciting and beautiful day with its moments of worry, but I was feeling good physically and ready to see what came next.  After all, it was only day 1!
Posted by Brian G at 7:59 AM